Wednesday's official results show his allies now control the senate which so far has served as a check on some of his more controversial policies.

The win gives him sweeping power to push his agenda including constitutional changes and reintroducing the death penalty.

The election has also cemented his family members in the political elite.

Despite criticism from rights groups over his brutal drug war, the president remains hugely popular across the Philippines.

What were the result?

There were 18,000 posts up for grabs in the election held on 13 May, but the most-watched contest was the race for 12 senate seats in the 24-seat upper house.

Nine of the new or re-elected senators are pro-Duterte, three are independents. The liberal opposition did not win a single one of the 12 seats.

The man who oversaw a drug war that has seen thousands of suspected drug dealers or users killed in police operations is among the Duterte allies elected to the Senate.

Human rights activists fear that former police chief Roland dela Rosa will now be protected from any legal action. The police say the killings were self defence.

Others elected to the Senate include the daughter of former dictator Ferdinand Marcos and the wife of one of the Philippines' richest men.

The opposition only has a minority of the other 12 Senate seats, which are up for election in 2022. It means the Senate is now firmly in the hands of Mr Duterte and his allies. 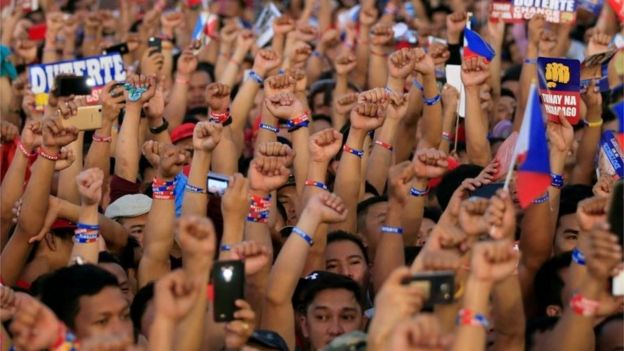 What does that mean?

New government legislation has to pass the Senate and until now a number of Mr Duterte's more controversial plans have been blocked by the upper house.

But once the new senators take their seats in July, the government will find it much easier to get legislation through.

An automatic green light is not guaranteed however, said Aries Arugay, associate professor of politics at the University of the Philippines Diliman.

"Some of the senators are aligned to Duterte only because of his overwhelming popularity at the moment," he said. Should the mood swing against him, some senators could drop their support.

For now though, Mr Duterte will likely have a free hand implementing his agenda.

And what is that agenda?

Mr Duterte wants to reintroduce the death penalty as part of his tough stance on crime and drugs. He also wants to lower the age of criminal liability to 12 years.

The opposition and rights groups vocally oppose any such changes, arguing that they will take the president's brutal war on drugs to yet another level. 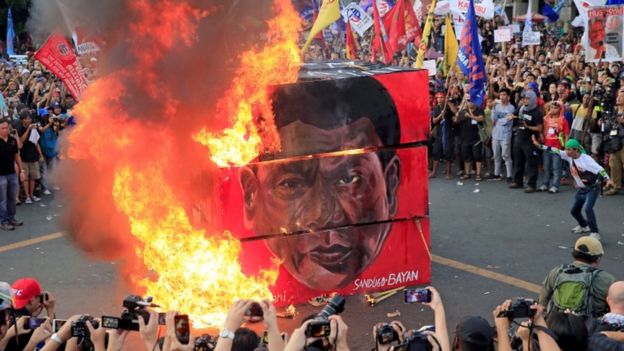 Mr Duterte also seeks to change the constitution to make the Philippines more of a federal system, giving more power to the regions.

While that could make sense in a vast country like the Philippines, there are fears it will entrench dynastic structures in local politics, said Prof Arugay.

"Without centralist oversight and without reforms at the local level, a more federalist Philippines will only mean handing unchecked powers to regional families and clans."

A Duterte dynasty in the making?

Family dynasties have long been a feature of politics in the Philippines. This Senate race saw several famous surnames competing.

Imee Marcos, the daughter of Ferdinand Marcos, is a supporter of the Duterte government and won a seat. Bam Aquino, the cousin of former president Benigno Aquino III, is part of the opposition and did not get a seat.

Mr Duterte's family is no exception. Before being elected president in 2016, he made his name as a politician running the southern city of Davao. Now, his daughter Sara has been re-elected mayor of that same city and many believe she will run for president in 2022, when her father's term in office ends.

It's not just Sara though - two of Mr Duterte's sons also ran for office. One ran unopposed to be vice-mayor of Davao, while another won a seat in the House of Representatives.