'He will have taken a step to dishonor our armed forces': One of the most highly-decorated retired US Army generals warns Trump against pardoning war criminals

One of the most highly-decorated retired US Army officers delivered a stark warning for President Donald Trump amid reports that he is considering pardoning convicted war criminals and service members accused of war crimes who are still awaiting trial.

"A pardon by President Trump for military personnel who have been convicted of battlefield crimes or are pending general court-martial would be enormously damaging to the values of the US armed forces," retired four-star Gen. Barry McCaffrey wrote in an opinion column published in The Washington Post. "He should not take this action."

The former infantry officer served multiple combat tours with the US Army's 82nd Airborne Division during the Vietnam War and commanded the 24th Mechanized Infantry Division during Operation Desert Storm. McCaffrey later went on to serve as the director of the Office of National Drug Control Policy for President Bill Clinton's administration.

McCaffrey referred to his own combat experience in his column and said he empathized with many service members who have navigated through the fog of war.

"I am the first to admit that small-unit, direct combat is brutalizing and raw," McCaffrey wrote. "I've had four combat tours and been wounded three times."

"Exhausted, filthy and scared, young troops struggle to survive and keep their buddies alive," McCaffrey added. "You are trying to destroy enemy fighters with rifles and hand grenades and entrenching tools at close range. You are not trying to make an arrest; your purpose is to kill these people."

McCaffrey argues that despite the difficulty in distinguishing friend from foe, "the armed forces subscribe to the rule of law."

"Our values as a fighting force demand that we not abuse detainees or prisoners of war under our control," he wrote. "Civilians and their property must be protected. We work very hard to minimize collateral casualties. It's part of our training and our code of conduct." 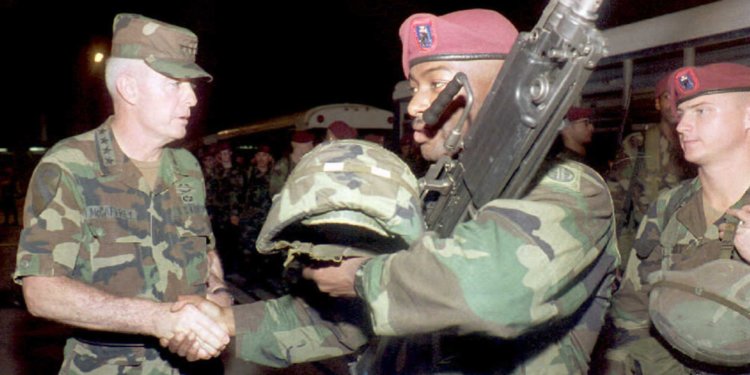 The White House reportedly requested dossiers on some high-profile cases, including that of Special Operations Chief Edward Gallagher, a Navy SEAL expected to stand trial on charges of killing an enemy prisoner and shooting Iraqi civilians in 2017.

The pardoning process typically takes months but the Justice Department was asked to have the files ready by Memorial Day weekend, a senior military official said to The Times. Gallagher's trial was originally scheduled for Tuesday, but it was delayed after his defense team raised concerns about the trial's fairness.

Earlier in May, Trump granted clemency to former US Army Lt. Michael Behenna, who was convicted of killing an Iraqi prisoner in 2008. Behenna was initially sentenced to 25 years in prison for the unpremeditated murder of a prisoner, but the sentence was reduced to 15 years. After spending five years in prison at Ft. Leavenworth, Behenna was granted parole in 2015.

McCaffrey wrote that a Trump pardon of convicted war criminals would "signal to the world that we are no longer a disciplined military force" and would "invalidate the principles of the congressionally mandated Uniform Code of Military Justice."

"It would tell foreign fighters that we accept the murder or maltreatment of our own forces if captured," McCaffrey said.

"If he pardons US personnel convicted by a military court of the direct murder of unarmed detainees or civilians, he will have taken a step to dishonor our armed forces," McCaffrey added. "On this Memorial Day, there are better ways to honor the many sacrifices and performance of America's armed forces and veterans than to exonerate those very few who did not follow the rules."

McCaffrey has been critical of Trump's presidency in the past. He described Trump's surprise trip to Iraq in December as "embarrassing" and "entirely inappropriate" after the presidentsigned pieces of campaign memorabilia for the troops, including hats emblazoned with the "Make America Great Again" campaign slogan.